John D. Hadden is a trial and appellate litigator with Penn Law in Atlanta, where he handles catastrophic personal injury and wrongful death cases across the state. He is also a registered mediator with the Georgia Of?ce of Dispute Resolution. John is president of the Atlanta Trial Lawyers Association, a member of the Atlanta Bar Association Board of Directors and past chair of the Atlanta Bar’s Litigation Section, a member of the Board of Trustees of the Atlanta Bar Lawyer Referral and Information Service, and a past chair of the Litigation Committee of the State Bar of Georgia’s Young Lawyers Division. John is a graduate of Emory University and the University of Georgia School of Law, where he was a member of the Georgia Law Review. John has been named one of Georgia’s “Legal Elite” by Georgia Trend, recognized by Atlanta Magazine in its annual list of Top 100 Georgia Super Lawyers, and holds an AV/Preeminent rating by Martindale-Hubbell. He has also been recognized by the Fulton County Daily Report as one of its “On the Rise — Top 40 Under 40.”

Andy Goldner received his undergraduate degree, with honors, from the University of Virginia and his law degree, with honors, from the University of Georgia in 2002. Andy started his legal practice defending medical care providers and insurance companies. In 2005, Andy began training under some of the best and most experienced Plaintiff’s attorneys in the state of Georgia, routinely handling cases valued well in excess of one million dollars.

For more than 18 years, Andy’s practice has been devoted entirely to representing individuals who have suffered serious injury or wrongful death arising out of commercial vehicle wrecks, auto collisions, daycare negligence, and premises liability matters. To date, he has recovered in excess of $60,000,000.00 for his clients.

Andy has a particular focus on child injury cases.

Andy has been lead or co-lead counsel on more than one hundred and thirty cases resulting in settlements or verdicts of six figures or more. These cases include seventeen seven figure results and an $18,100,000.00 settlement which was at the time believed to be among the largest pre-trial adult wrongful death settlements in Georgia history.

In July 2014, he was co-lead counsel on a wrongful death case in Fulton County involving a young, disabled man that resulted in a $2,000,000 verdict, after the defense offered $50,000 to settle. In July 2019, Andy tried two automobile collision / serious injury six figure cases to verdict, where the jury awarded between two hundred and three hundred percent of the last offers by the insurance companies. He has been voted by other attorneys in Georgia as a ‘Super Lawyer’ in the area of personal injury litigation every year since 2009, a Top 100 Georgia lawyer in 2017, 2018, 2019, 2020, 2021, 2022, and 2023, recognized in Georgia Trend Magazine as one of Georgia’s Legal Elite in 2011 and 2016, and was selected by the Daily Report as a “Rising Star” in 2014.

David Lefkowitz graduated from Columbia University with a B.A. and earned his J.D. from Emory University School of Law. The Lefkowitz Firm, LLC, represents individuals and corporations in their claims for legal malpractice (legal negligence) and similar claims such as breach of fiduciary duty, executor misconduct and ethical misconduct by attorneys and other fiduciaries. The firm also represents attorneys and law firms with regard to risk management and attorney’s fee disputes. David is an adjunct professor of legal malpractice law, ethics, and risk management at the University of Georgia School of Law and is a frequent speaker at continuing legal education seminars. David has offices in Atlanta, Georgia and Athens, Georgia. 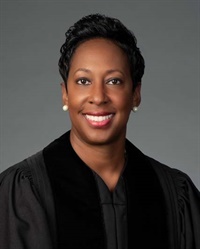 Justice Verda M. Colvin was appointed to the Supreme Court on July 20, 2021, by Gov. Brian Kemp. She is the first African-American female appointed by a Republican governor to the state’s high court.
Previously, she served on the Court of Appeals, having been appointed by Gov. Kemp in April 2020. Her time as judge also includes nearly six years as a Superior Court judge in the Macon Judicial Circuit, during which she served on the Council of Accountability Court Judges.

Justice Colvin discovered her love for trial work early in her career as an Assistant Solicitor in Athens-Clarke County. From there, she went on to serve as Assistant General Counsel to Clark Atlanta University and then as Assistant District Attorney in Clayton County. Before becoming a judge, Justice Colvin was an Assistant United States Attorney in the Middle District of Georgia, where she prosecuted a wide range of offenses from drug trafficking to white collar crime.

Born and raised in Atlanta, Justice Colvin attended Daniel McLaughlin Therrell High School. She earned her bachelor’s degree in government and religion from Sweet Briar College in Virginia and her juris doctorate from the University Of Georgia School Of Law.

Judge Colvin is committed to service professionally and personally. In 2019, the Supreme Court appointed her to serve on the Judicial Qualifications Commission (JQC). Additionally, during her tenure as a Superior Court Judge she served on the CSCJ Bench & Bar and Legislative Committees and as a member of the Council of Accountability Court Judges (CACJ) where she was part of the Funding Committee, the Committee Chair for Accountability and Treatment Courts and a member of the CACJ Executive Committee. Justice Colvin was serving as co-chair of the Rules Committee for the Council of Superior Court Judges (CSCJ) at the time of her appointment to the Court of Appeals by Gov. Kemp.
She formerly served on Gov. Nathan Deal’s Criminal Justice Reform Committee and the Law Enforcement Task Force Committee. During her service on the Court of Appeals Justice Colvin served as a member of the Internal Operations Manual and the Continuing Judicial Education and In-house Continuing Legal Education for Staff Attorneys. She co-chaired the Strategic Planning/Court Futures Committee and was appointed to serve on the Continuing Judicial Education Board of Trustees. In her service on the Supreme Court of Georgia she currently serves as the Chair of the Access to Justice Committee.

Justice Colvin is a member of several organizations and boards: The Order of Barristers, Macon Bar Association, American Bar Association (ABA), Georgia Association of Black Women Attorneys (GABWA), Georgia Association for Women Lawyers (GAWL), Gate City Bar-Judicial Section, William A. Bootle American Inn of Court, Charles Weltner Family Inn of Court, Clarence Cooper Inn of Court, Clarke-Carley Inn of Court, the Downtown Rotary Club of Macon , Board of Trustees for Mount de Sales Academy (Chair of Board in 2021), Jack and Jill of America-Macon Chapter, Board of Directors for the Fuller Center for Housing of Macon (President 2018-2021), Boys and Girls Club of Central Georgia Corporate Board of Directors, Macon Bibb Citizens Advocacy Board, Secretary (2021-Present), Co-chair of ONEMACON 2.0, Georgia Citizen Advocacy Board, Sweet-Briar College Board of Trustees, Goodwill Industries Board of Directors, Wesleyan College Board of Trustees, and Knight Foundation Advisory Board. Justice Colvin is a proud Leadership Macon 2010 graduate.

Justice Colvin has served as an adjunct professor at Mercer School of Law and she is a member of First Baptist Church where she serves as a children’s Sunday school teacher and on the Women’s Ministry Leadership Team. She is the proud mother of two children, Weston and Taylor, and the wife of Nathaniel Walker with whom she shares two other adult children, Nathan and Nathalie.

You are registering for the Live Event, which would require appearing IN PERSON at the event. If you would rather attend online, please select the Livestream version rather than the Live Event version.

Please be advised that your credit will not be reported to the State Bar of Georgia CLE Regulation Department until after you have completed the steps necessary to earn credit for that program.

Self reporting is required for all other jurisdictions.

The information presented is solely for educational purposes. The opinions expressed by the faculty in their materials and presentations are their own and do not necessarily reflect the opinions of the State Bar of Georgia, its officers, directors and/or employees. The faculty is not engaged in rendering legal or other professional advice and these presentations and publications are not a substitute for the advice of an attorney. All publications and presentations were created to serve the continuing legal education needs of practicing attorneys.

You can find FAQs here.